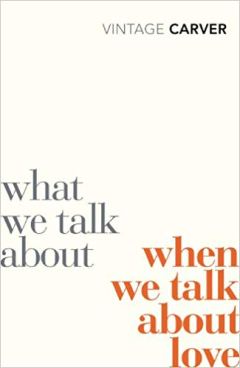 The most disturbing of reads I find are not the supernatural tales or horror stories or even crime thrillers but those works that meticulously describe the human condition in a state of poverty.

By ‘poverty’ I not only mean financial strain but in particular the all-pervading poverty of spirit which has a soul crushing bleakness that blows through the reader as the coldest of winds. Raymond Carver is a master of conveying this state and the characters that inhabit it.

The short story collection What We Talk About When We Talk About Love is a perfect example of the form of writing known as ‘dirty realism’ or ‘literary minimalism’. Carver explores the lives of predominately working class Americans living or perhaps more correctly struggling to survive in the Pacific Northwest region. Prevalent themes across the collection include the breakdown of marriage through boredom and or infidelity, the devastation of grief, and the futility of both aspirational ambition and love in a world diminished by financial and social pressure.

Images resonate long after the stories finish of claustrophobic lives only tolerable with the short-lived relief provided by alcohol, cigarettes, and or sex. Given this, unsurprisingly, there is also a palpable sense of violence barely restrained within the wafer-thin constraints and facade of a ‘civilised life’.

The closing story ‘One More Thing’ for example, is haunting in its depiction of the anger and desperation of a husband forced out of his home by his wife and child following his own deplorable behaviour of drink and aggression. There is so much pain and so much futility.

‘L.D. put the shaving bag under his arm and picked up his suitcase.

He said, “I just want to say one more thing.”

But then he could not think what it could possibly be.’

Carver employs a stripped-back language as the stories unfold through the naturalistic observations and conversations of his characters. This minimalist technique gets the reader right inside the head of the character. We feel what the character feels and see what the character sees and fully inhabit their world. The detail of the writing is visually striking and in just a line of text he crafts the landscape and sets the mood of the moment. In the story ‘The Third Thing That Killed My Father Off’ Carver writes,

‘It was a warm, drifty day. You could see the dust hanging in the air.’

Beyond setting, Carver keenly captures the physical traits that succinctly depict a character.  In the tragic and powerful story ‘The Bath’ about a child knocked over by a car on his birthday, Carver observes of the mother staring lost and anxious at her son lying in the hospital bed,

‘The woman stood there a while longer, working her lip with her teeth.’

With each story you get the sense of arriving into the narrative where something has happened outside of it, with the effect that the drama builds and lives on in your imagination from what is implicit as much as what is explicitly described.  In the opening story ‘Why Don’t You Dance?’ a man’s possessions, the entirety of his belongings, sit in the driveway for sale. The question is why? We are never given the answer, just the careful detail of each object that spoke of a life now changed or ended.

But the most disturbing story of the collection for me is its title namesake ‘What We Talk about When We Talk about Love ’. In this penultimate story two couples in love sit around a dinner table slowly getting drunk. They discuss in a rambling way what they think love is. One suggests even violence and suicide is forgivable in the name of love. Another ends their discussion by suggesting to his horrified lover and friends that love simply doesn’t last, even true love is only true for a limited time. In the context of the whole collection it is a message which is devastating, after all the only thing that doesn’t rely on money is love. The only thing that perhaps can lift a life from poverty is love. The loss of love is the loss of the purpose for life itself. This devastation is embodied by the narrator’s final observation,

‘I could hear my heart beating. I could hear everyone’s heart. I could hear the human noise we sat there making, not one of us moving, not even when the room went dark.’

Commentators note that Carver’s own life carries the themes within it that his writing explores. This makes perfect sense and explains that the power in his work comes from personal experience, adding fuel if it is needed to the writing adage ‘write from your heart’ even if perhaps the end result is hard to read.

© 2016 All rights reserved. No reproduction without written permission.

This site uses Akismet to reduce spam. Learn how your comment data is processed.

FIND ME ON SOCIAL MEDIA

Check out my blog for my Literary Crushes.

This is the place where I will share with you the writing I love. The likes of W H Auden, John Berger, Elizabeth Bishop, Rita Mae Brown, Raymond Carver, Carol Ann Duffy, E M Forster, Nancy Garden, Jackie Kay, Kirsty Logan, Ali Smith and Virginia Woolf are tingling at my fingertips. You may not feel the same about my choices, I don’t expect you to. I love that we all care about different things, because that’s the joy of it, it’s what makes us…us.